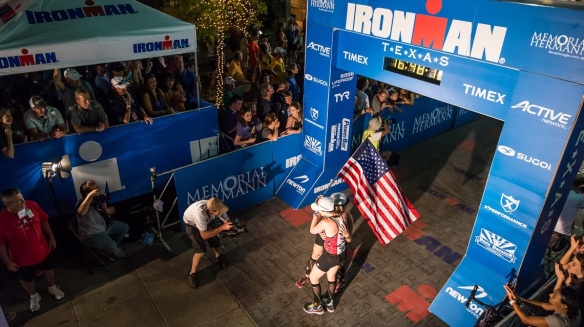 Follow up to the guiding article I posted earlier. Leona and I were interviewed before the start of the NYC Tri about guiding. I had an amazing time racing with Leona Emberson. 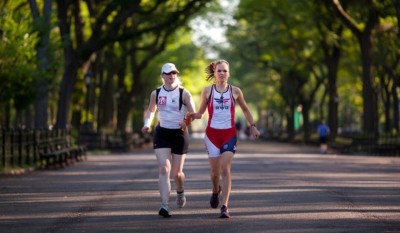 The toughest of the three legs of an Olympic triathlon, for a blind athlete, is generally the swim.

A plunge into cold water can drown one’s alternate sensory perception. Sudden, seizing panic attacks can follow, like waves of paralyzing disorientation. Shivering fits. It is at these rare nadirs when the blind may seek an encouraging tug.

Six completely blind athletes will swim the 0.93 miles, bike the 24.8 miles and run the 6.2 miles of the New York City Triathlon’s course through the West Side of Manhattan on Sunday. Making every step, spin and stroke along with them will be six volunteer guides, tethered to them.

“It’s a teamwork, a partnership, no question,” said Caroline Gaynor, who will be making her fifth guiding appearance. “I don’t necessarily like it when people say, ‘Oh, it’s so great you do that.’ I get as much out of it as they do.”

During the swim and the run, the pairs are connected by bungeelike cords, typically wrapped around each other’s waist (occasionally, they are attached by the wrist). For the bike portion, they ride a tandem — a specially modeled dual-seat cycle, sighted guide in front, legs pedaling in synchrony.

When guiding, the minutest of details must be tended to. The night before the race, shoelaces need tying, goggles need taping, tethers need adjusting to a manageable length. Too short, and rhythm can be disrupted. Too long, and the blind swimmer cannot feel the guide’s directional tugs.

The number of steps from the river to the road might be counted. Succinct communication calls, like a coach’s playbook, are critical for the swimming and cycling portions, when hearing can be difficult.

When the guide Sameh Mikhail met his athlete, Terry Gardner, for the first time in 2010, it took them nearly two hours of practice just to be able to balance on the tandem bike.

The runs involve near-continual dialogue: alerts about the next turn, dip, hill, curb and grate, along with the occasional pep talk. Mikhail said Gardner even liked him to keep a running count of every person they passed.

Understandably, the guides need to be in top triathlon shape to be able to race with the athlete and also adapt to conflicts that almost always arise.

The first time Steve Zink ever guided, their tandem bike’s rear derailleur broke halfway down the West Side Highway. Unable to fix it and unwilling to give up, Zink and his partner decided to run the rest of the way, carrying the bike a good 10 miles, in just their socks.

“He’s behind me holding onto the bike and I’m guiding him and guiding the bike,” Zink said. “We were coasting down hills. We developed a system on the spot to sort of skateboard along when it’s flat.

“It was improvisational,” he added. “A lot of these people are totally capable; they just need your help.”

Gaynor, 28, said she had raced in more than 50 triathlons individually since high school but preferred only guiding now. Her partners vary.

In May, Gaynor noticed a Facebook group for blind triathletes and posted a message inquiring if any needed a guide for the New York City Triathlon. Jan Ditchfield — the founder of an Ontario-based organization called Won With One, the only self-financed program for blind and visually impaired triathletes in Canada — responded.

Ditchfield connected Gaynor with Leona Emberson, whom she had never met before Friday, when Leona arrived and the two practiced a bit in Central Park. The crash-course training, Gaynor said, is part of the challenge.

“I think of myself as equipment,” Gaynor said. “These are competent, capable people, and they don’t want to have their hands held unless they need to. They wouldn’t be racing with me unless they needed to have a guide. So I want to respect the amount of independence that they want, but also give as much as help as they need.”

A few organizations, including Won With One, work with volunteer guides and pair them with athletes based on size, age and ability (most races enforce same-gender pairings). The athlete establishes the pace.

John Korff, the race’s owner, said the triathlon had averaged four to eight blind athletes each year since 2002. On Korff’s desk in his Midtown Manhattan office is a framed photograph of Gaynor finishing in 2008 with Kim Borowicz, who has tears streaming down her cheeks.

“The guide is giving that person the gift of the triathlon,” Korff said. “This is their sport, but they can’t do it alone.”

For 11 months of the year, Mikhail, 33, trains and races individually. But, after meeting Gardner, Mikhail said as long as Gardner still wanted to do it, he would never run the New York City Triathlon alone again.

“It’s Terry’s,” Mikhail said. “I feel like that’s his focus of the year. I would never be able to selfish enough to be like, ‘O.K., it’s about me now.’ There’s so much more to this now that running it by myself would feel essentially empty.”

If all goes well, six blind athletes will finish on Sunday, and their “eyes” will detach and walk away. The guides are not technically registered, nor are they recorded as finishers. The blind athletes receive most of the hugs and the handshakes.

The guides, those who steer, steady, tug, coach and motivate, only share in the internal reward.

“It’s their race,” Gaynor said. “If I can just help a person have their best possible race, so that they can cross the finish line feeling like they accomplished something, like the way I have felt when I’ve finished races, then that’s awesome.”

Here is a link to the original article: