Photo credit: Christopher Joyce. Here’s a photo of me riding through the desert in 2012

I’ve gotten a lot of questions about Race Across America (which I will refer to as RAAM for the rest of this post) over the past week and I realized that I haven’t fully explained what this race actually is. Many people I know have spent a month or two riding across the U.S. These people are usually riding self supported (no motorized vehicles following along), and they will plan a route that passes through areas of the country they’ve wanted to visit.

RAAM is very different. It is billed as the “world’s toughest endurance race.” Cyclists begin riding in Oceanside, California and must follow a very specific route, passing through checkpoints along the way. Each solo rider or team of riders must reach the finish line in Annapolis, Maryland within a specific amount of time. This is anything but a pleasure ride.

The reason I’m saying “four bike” instead of “four person” is because my team is comprised of four blind/visually impaired stokers and four sighted pilots. We are attempting to become the first four tandem team with all blind stokers to complete this event.

If you’re not competing solo, RAAM is a relay. Think Ragnar on bikes, only much, much, much longer.

There are many ways to break up riding- you’re allowed to use whatever strategy you’d like. But generally, people tend to break four-bike teams into pairs. Two bikes will alternate riding for a set distance or time, and then they will rest while the other pair of bikes alternates riding.

When I raced with Team RWB in 2012, we used this strategy. My “partner” and I would ride for 4-6 hours, each person taking an hour long pull at a time. Then we would go into the RV and sleep for a similar amount of time. 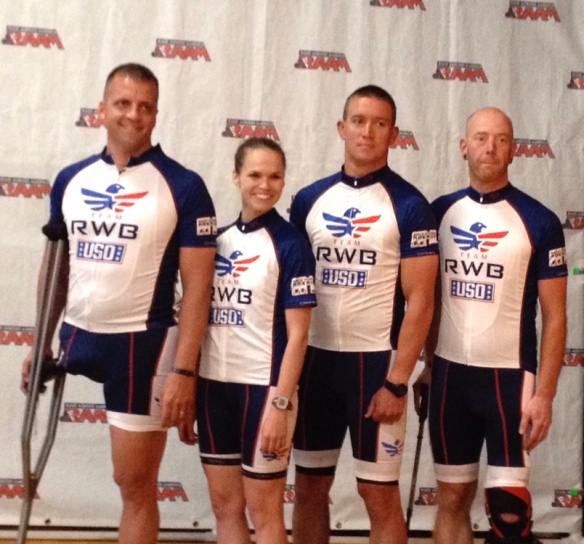 Here is a photo of my team from 2012. I was the only civilian member of the team. My teammates were (are) absolutely badass. What’s interesting is that my 2012 team was a 4-bike team with 6 working legs – two of our members were wounded in combat and either didn’t have a leg, or had a non functional leg. This year, I’m on a four-bike team with 16 working legs. However, if you think that riding a tandem is easier than riding a bike solo, you are mistaken.

During RAAM, we will cross two mountain ranges and climb 170,000 feet. Tandems don’t like to go uphill very fast!

On Team Sea to See, each pull will last approximately 30 minutes. We are planning to shoot for four hour riding blocks, though that may vary, depending on where our follow cars can safely pull over for exchanges.

So, imagine that we have four tandems. Let’s call them A, B, C, and D.

For a four hour block, bikes A and B will ride 30 minutes at a time. We’re riding at time trial effort. While bike A is riding, bike B is sitting in the follow vehicle.

During this time, our C and D riders are sleeping and eating in their RV.

After four hours, our teams switch. After they’re done riding, Teams A and B will try to clean up and eat as fast as possible, to maximize sleep time.

Because Team Sea to See has 8 cyclists, in addition to our crew of 20-ish people, we will have two RVs for sleeping and eating, as well as follow cars that drive behind whoever is riding.

During the day, the follow car will leapfrog ahead so that the team that’s on deck can get ready to ride as soon as their wheel overlaps with the bike that’s finishing a shift. This is called a rolling exchange. At night, the follow car will always be behind the tandem that’s on the road. This means that both bikes must come to a complete stop before the on deck team begins to ride. This is called a stationary exchange.

The logistics of this race give me a headache. If you want to give yourself a headache, check out the 61 page rule book for this year’s RAAM. Thankfully, my job is just to ride. We have crew members that are in charge of navigating, cooking, working on bikes, and driving each of the vehicles. We’re traveling with medical professionals and massage therapists. When I describe it like that, RAAM sounds kind of cushy for the riders. 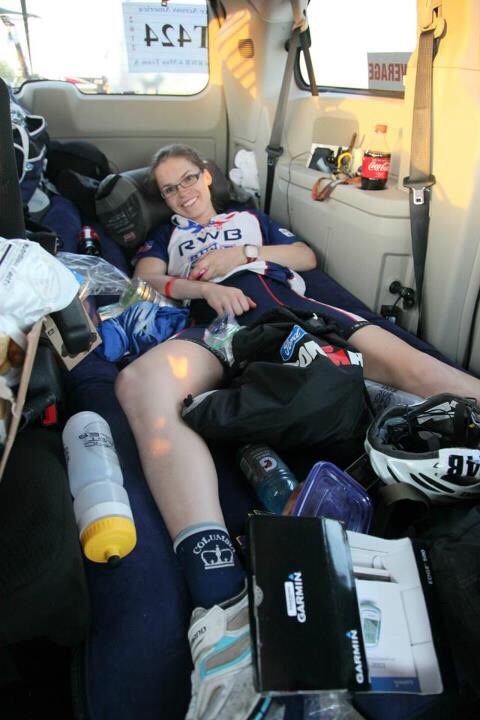 Here is a photo of me from 2012. We rode in hatchbacks, so our riders could lie down. Half of the time, I was covered in gear and trash.

The hardest part about RAAM (in my experience), is not the riding. It’s the sleep deprivation. To go back to solo riders for one second, I have to say that I have no earthly idea how they do it. Solo riders get 12 days to ride 3000+ miles. Can you imagine sleeping 1-2 hours a day (max) for close two weeks? I can’t. Read this article from top American RAAM finisher Brian Toone’s teammate if you want to learn more about what it’s like for solo racers.

Four bike teams have nine days to complete the race. Team Sea to See is shooting for 7. But that still means that for seven straight days, our cyclists aren’t sleeping for much more than four hours at a time. Our crew members operate on even less sleep!

In 2012, I remember falling asleep on my bike, somewhere in the Midwest. I also remember having extra energy when one of my teammates was exhausted, which meant that I had to ride while he slept. RAAM is all about problem-solving and adapting. My stoker, Jack Chen, recently said that the life of a blind/visually impaired person is all about problem-solving and adapting. I couldn’t agree more (based on what I know about my visually impaired friends’ lives).

Jack Chen and I post for a photo with his new co-motion tandem.

When I raced in 2012, our team hoped to finish in seven days. Unfortunately, we faced a number of issues that slowed us down. The biggest one was when our follow vehicle caught on fire in Arizona.

Learn from our mistake- never park a car on dry grass in the Arizona desert! The catalytic will catch on fire and you will lose your vehicle.

As I’ve been writing this post, I have looked back through photos and posts of RAAM 2012, I still can’t even believe that I was part of such an incredible journey.

People have asked me when we will finish. I’ve already stated that we hope to finish in seven days. However, we don’t actually have any idea when Team Sea to See will cross the finish line. I’ll post a live tracker later this week, if you want to follow our progress. You can also follow us on Facebook and Instagram (@teamseatosee) where we’ll be posting photos and videos. I plan to use my blog, that I rarely update, as a way to keep my friends who aren’t on social media informed.

Team RWB 4-man A crosses the finish line in Annapolis around 3AM. Our finish time was 8 days, 12 hours, 16 minutes

I tried to answer some of the basic questions I’ve been asked, regarding how we break up the riding. If you want me to expand on any other details of the race, please leave a comment and I’ll do my best to answer everything. Also, please forgive any typos or errors! Since I plan to post frequently over our trip, I’m going to spend less time worrying about copy-editing my own work.

4 thoughts on “Race Across America – A Breakdown”